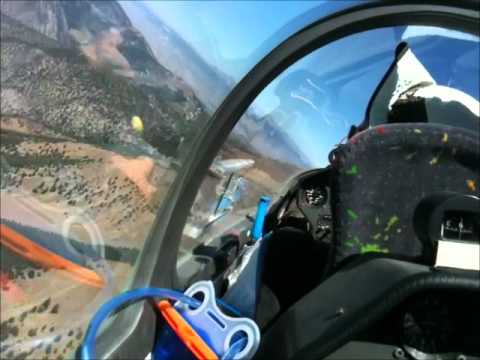 Finding Wisdom…by Paul Allen July 1, 2010 The lady behind the bar looked me over skeptically. I was dripping mud on her already muddied floor. Though too old to make it work, I tried my boyish grin. “Sorry”. She scowled. “Which ditch did you crawl out of?” came her not buyin any of it response. Truth was, I HAD just crawled out of somebody’s ditch. Wisdom, Montana is possessed of a classic white church with bell tower surrounded by a few dozen houses, a Sinclair station, Fetty’s Bar/restaurant, and a mercantile. There is no cell phone service in the Big Hole valley so I had had to hitch here to find a land line. “I’d like to pay you for a long distance call” I asked. She pulled a chorded phone from beneith the bar and turned her attentions to some raucous locals. There was no answer so I left a message as to my whereabouts and sat down. The woman returned, clearly disappaointed that I was still there, muddying her floor. She wiped the bar in one motion and slid me the menu. Nothing looked interesting but I was soon informed that the kitchen was closing and that all they were serving was “the Special”. Why the menu, I wondered. I ordered “the Special” which turned out to be a pretty OK reuben with home made soup. I read the paper placemat while bar maid studiously ignored me. Wisdom was named after the Wisdom River; so called by Lewis and Clark for one of the noble traits recognized in their benefactor Thomas Jefferson. The River was later renamed The Big Hole, but the town, which now holds over 100 persons, kept its quixotic name. The US Calvary nearly anihilated the Nez Perce here in 1877 in the Battle of the Big Hole. Today, the town was my refuge from mud and hoards of mosquitos. Five hours of grueling mountain flying had brought me to the continental divide at 17,000′ above Lemhi pass. Snow clad peaks girded the Montana/Idaho border like so many Nez Perce sentinals. The mountain snows trickled life giving melt to a sea of lush grass that extended nearly out of sight to the east. Classic Big Sky country. Cold had crippled my radio but my position was recently known and I was laying bread crumbs with a SPOT Locator. I drifted into lands where one’s spit flows to the Atlantic. Eventually the woman returned to collect my plate and warmed slightly when she found that I intended to pay my bill. She asked about the mud and the abundance of welts on my face and I told her thusly my truth: “Your town is but an island”, I observed. “An island in a vast lake,” She didn’t argue. “Your grass is but a disguise to entice the unwary aviator.” “Your hoards of mosquitos have met out justice for my lifetime of sins.” “Your mud has humbled me and my once proud sky ship: “Be this Purgatory?” “No”, she said. “This is the place of Wisdom”

We had many Cu’s as soon as 10:30am, and the operation started around 1pm. The cloudbase was a bit low (14,000 ft and 15,000 ft in some places) considering the hight of ridges (11,000 ft to 13,000 ft) , we had pretty good flights. I went north following the ridge in which King Mountain is part of, turned south, then jumped to a mountain area west of it. I flew over Sun Valley, headed as south as the mountains took me, and headed east to go home. 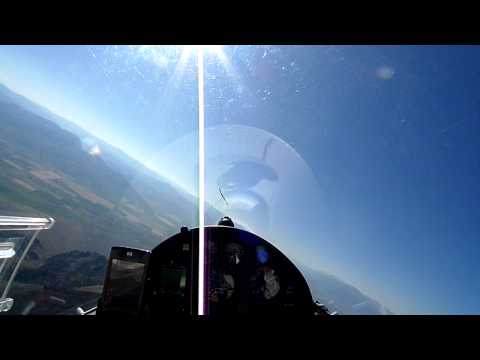 Thought most of the flight was over mountains, there were many good airports to landout. I liked the path I took for coming back from west. Because the straight line to King Mountain goes between two hills, I did not need add an extra altitude to what computer said to fly over a ridge. There are a couple of airports you can safely landout if you were to low to make it to King Mountain. Also, small hills around King Mountain were generating 2 to 3 kts of lift very late. It was very friendly way back home. For more soaring storys by Gen Shibayama, see his soaring blog at http://genssoaring.blogspot.com/search?updated-min=2009-01-01T00%3A00%3A00-08%3A00&updated-max=2010-01-01T00%3A00%3A00-08%3A00&max-results=50 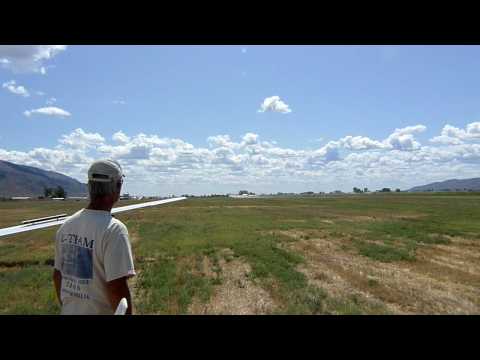 Three 500K  flights in one week at King…

Thanks John for the well organized event. I really enjoyed flying at King and am planning to come back again.

As someone who is hungry for distance, this site did not disapoint me for distance potential and scenery. The scenery is one of the best I had seen, and I am flying all over the country.  I averaged nearly 500km per flight in 3 flights, the longest being 636km to Yellowstone park and return.
http://www.onlinecontest.org/olc-2.0/gliding/flightinfo.html;jsessionid=8A60D1FE7CF998B8A3F28B5CE0CDED5F?flightId=1081580547
On the last day, I flew straight out west past Boise and landed at Homedale near the Oregon border.

See you next time,

Other OLC flights from King…

http://www.onlinecontest.org/olc-2.0/gliding/flightsOfAirfield.html?aa=KING02&st=olc&rt=olc&c=US&sc=&sp=2011     Just click on info button for details and map of each flight

CHASIN’ FRANK No matter whether we’ve known it or not, we’ve all been chasing Frank for a long time. Frank Gillette’s always been the flying icon to aspire to, the hero of our flying, he’s been around longer than anyone else, longer than the trees. I first flew with him in 1978 at the Riggins Idaho Fly In, and over the years have realized what large shoes those were to step into. His Idaho State Record has been equally difficult to surpass, and every year that has gone by, we all realize more and more what an accomplishment that was back almost a decade ago. Moreso, even four years after the advent of rigids, he was still on top, untouchable; try as we might, we couldn’t even come close to the bar he set for us to fly over. So it is with a measure of both pride and humility that I recount the following flight, because in the yeoman’s effort to raise the bar a notch for the region, I am acutely aware of the size of shoes that I am sticking my toes into. Friday, July 14, 2000. The day had some of the ingredients I wanted to see: there was a wide temperature spread predicted, 40’s at night to high 90’s during the day, so it would be unstable. It was dry, so cloudbase would be high. Dust devils abounded early on launch. But then high cirroform clouds started pushing in from the southwest, and no cu’s were developing near launch. What the heck, we’re here: Ken Cavanaugh launched first, followed by Eiji Yakoda, I was third clocking in at 1:25, Dave Kriner fourth, all in the air within 15 minutes. Climb out was tedious, the King Mt we know and love; I pulled out of the squirrely lift at 11,300′ and flew over to Rams Horn canyon, Ken and Eiji along with me, Dave lingering back. Still no clouds nearby, a few well to our north, high and ragged. Hmmm. We climbed some in the canyon, to 12,000′, but I wanted to see if it was more unstable to the north, so I pushed on down the ridge. The numbers aloft had indicated the Ruby Route; Ken had said on the way up that on this route, he didn’t like to go over the back past the middle of Sunset Ridge, and there is much merit to this, as it is the highest point of the ridge, there is a secondary ridge that extends to the east off the backside to mute the rotor, and it is the nearest point to the Lemhis. Well, none of this mattered anymore; I was getting drilled out in front of Sunset. Chairman Mao said that “the longest journey begins with the first step”, but my journey was ending before it started! While Ken and Eiji were fighting it out and slowly climbing still at Rams Horn Canyon, I was heading out over the foothills of Sunset for a landing. Down to 8600′ I zero sank for awhile; it eventually built and got me back in the saddle up to 11,500′. Persistently I pushed north, looking again at those ragged cu clouds on the range across from Mackay. But it got worse. As I slowly dribbled north in the weak conditions against a now quartering headwind, Eiji then Ken started to go over the back from the canyon at 14,300′. But not me; I was plowing lower and lower. Down to 9,600′ at Pass Creek I radioed that I’ll try to get up and over at the pass, but was not having much luck. The venturi at the Pass was full on, I rocked and rolled through red rocks and the foothills before Invisible Mt., and finally got around the corner and started a light climbout. I skated past Invisible now at 10,500′, and on the next peak to the north, WOW ITS HERE!! Holy Smokes right where the ragged clouds just started to begin, the lift was thermonuclear. I eased my Laminar deeper and deeper into the violent column until I was full on at 1350 fpm on the averager, 60 degree bank, gripping and ripping, drifting back with the climb, ah yes I recognize this!! I staircased it; I was too scared to go straight over the back, this being the widest possible and most formidable point of the range for a crossing, so out in front again at 13,500′, thermalled back, out in front again at 16,000′, and calmly told myself that this was it, the one, you were over the back with its drift, so get into that zone of tracking, ignore the fact that you forgot your bar mitts and can’t feel your gloved fingers, you need altitude and drift. Ever so careful not to exceed 17,999′, I radioed to the surprised Driver Toni in Howe that I was over the back north of Invisible. Yahoo!!! I had finally taken the first step in the long journey. I drew a bead on Bell. It looks like the Grand Teton from the distance and ever moreso up close. I had a tailwind component of about 18 mph, picked up a little zero in the center of the valley, and moved to Bell as if on laser track with a ground speed of 62 mph. With no cu’s for the crossing, I was intent to get where there might be better lift; there was a cu on Bell and to its north, so I had reasonable hopes, though it takes a long time to fly the 25 miles to Bell, even at 62 mph. I aimed for the north shoulder of Bell’s canyon, figuring the dying cu would have ripped from the obvious rock scree there, and maybe I could get on that train. But I was too late, I only got the trash of its departure, gaining 1200′ up to 11,300′ in the swirls and eddies. Radio reports from the guys weren’t good: Ken and Dave had landed over the back